HELLO + WELCOME. Below you will find a library to easily locate all the posts and pages we have. Simply click the pink links and away you go!

Overlanding Out of Africa: Arabic plates have fines, Eslam, preparing to ship out, Egypt

This Piss Room, Please: Port Said in Egypt, we meet out fixer, ship out of Africa, Egypt

It’s The Journey, Not The Destination: Reaching the top of Africa, Port Said, video, Egypt

Snipered In Suez: Driving through Egpyt a sniper points his gun at us, Jaane

I See The Sea: Seeing the sea for the first time in nine months, EgyptEgypt desert

Boy These Egyptians Can Talk: Overlanding through Egypt

Firebombs And A Daylight Shooting In Aswan Part 2: Aswan, arriving in Egypt, Kamal the fixer

Firebombs And A Daylight Shooting In Aswan Part 1: Aswan, arriving in Egypt, Kamal the fixer

When Gareth Became An Honorary Woman For The Day: Wadi Halfa, Mazar Sudanese fixer, the ferry from Sudan to Egypt

Luckiest People In Sudan: How will we exit Sudan?, Jebel Barkal, North East Of Sudan, Phone call with Mazar

Wrap Up {Edition 40}: We did it – we crossed Africa, Entering a whole other World (Europe!)

You, You, You: Ethiopia, Afar region, driving at night, injera, Adama

Marsabit To Moyale: the road from Marsabit to Moyale in Northern Kenya, Camp Henry

How Did We End Up Here?: Kenyan Polo. Nyeri, Simon and Remo Lesotho Hair Pins and Heartache: Tackling Sani Pass and the churned up tracks of Lesotho

The Elephants Of Addo: Wildlife from a tarred road park!

Kariega: In infamous Thandi the Rhino who has been attacked by poachers and survived and meeting Dirk Meiring and his darling family

Into Namibia We Go: Our first border crossing with the Carnet, Kolmanskop, Cape Diaz, heating up

The Most Beautiful Road In Namibia: Driving the scenic D707 route

Whispered Words Atop Dune-45: Sossosvlei, Dead Vlei and having Dune 45 all to ourselves in Namibia

A Walk With The Himba People: We visit a traditional Hima village

A Busted Land Cruiser PART ONE: The day bolts sheared off our Troopy’s fan and left it dangling in the middle of Etosha

Mkulumadzi Matjete: Experiencing the wildlife reserve and what we loved about it Kgalagadi Lodge: The perfect place to stay just outside the Kgalagadi. Hosted by the owner/operators.

!XAUS Lodge: In a remote corner of the Kalahari desert which we drove 90 dunes to reach. Hosted by !Xaus.

SUMMARY SERIES: Tasmania: Including our hits, misses and detailed statistics. Wrap Up {Edition 32}:  Leaving WA after 9079kms, Supporter Announcement: REDARC, An invitation to you

Wrap Up {Edition 26}: June 2013: Crossing the border from Northern Territory into Western Australia SUMMARY SERIES: Driving The Northern Territory: A summary of our experience in Tasmania. Including: hits, misses and detailed statistics. Robbery At Dalhousie Springs: May 2013: Gareth woke one morning to realise he had been robbed… SUMMARY SERIES: Driving around Tasmania: A summary of our experience in Tasmania. Including: hits, misses and detailed statistics.

5 Incredible Outdoor Experiences In Tasmania: Research we did before we hit the road on awesome outdoor experiences in Tassy. Our One Day Has Come: March 2013: We count down the final day until we jump in the Troopy and hit the road. Content in the knowledge that we have turned our ‘We’ll do it one day’ into reality.

PREPARING FOR AN EPIC EXPEDITION WRAP UP {EDITION 11}: January 2013: A Brand New Year, Progress On The Rig, Support Announcement: Tracks4Africa, First Aid Course, Health On The Road, 51 Days To Go, Managing Our WIP (To Do List)

WRAP UP {EDITION 10}: December 2012: First Night In The Pop-Top, A Tour Of The Drifta Factory, Progress On The Vehicle, Minimalise Challenge, Christmas 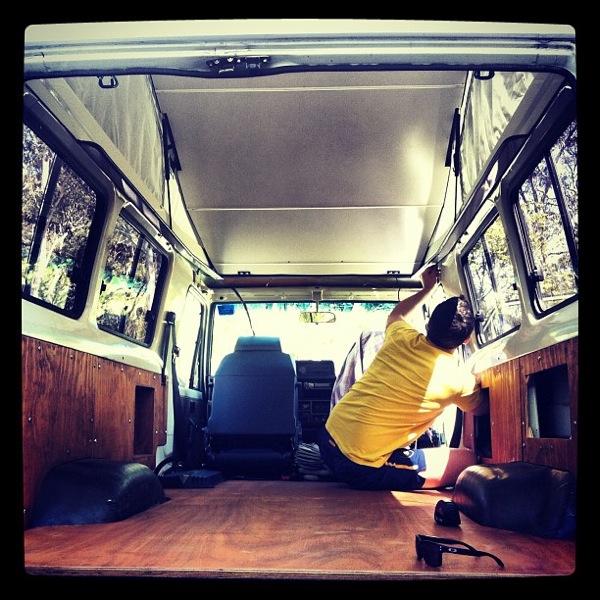 WRAP UP {EDITION 07}: November 2012: Partnership With The Pat Callinan 4X4 Team, Progress On The Rig, Canvas Sides Finally For The Pop-Top, An Hour Out Of Sydney Post Card

WRAP UP {EDITION 06}: October 2012: First Popping Of The Pop-Top, Work In Progress, Generosity And Thanks, Randy Reads, A Post Card For Romantics

WRAP UP {EDITION 02}: September 2012: Launching Our Dream, Shedding Stuff, Troopy Roof Conversion, Operation Feel Like A Lady When On The Road, On The Road In Queensland Tracks4Africa: The mapping systems we will be using in Africa.

Our 4WD Drifta Fit-Out: Click to see our custom 4WD interior and find out why we designed it the way we did.

Drifta Snow Peak Fire Pit: One of most favourite bits of kit. The post contains video and pics of the pit in action.

MGLSAT Satellite Phone: MGLSAT are a key supporter of this epic expedition. This post takes a look at their gear we will be travelling with.

Cooking On The Road With Snow Peak Gear: We had a lot of questions about how we were cooking on the road – so we whacked together this post.

NOTES FROM THE ROAD

NOTE FROM THE ROAD #0: The Ideas Of Living

NOTE FROM THE ROAD: #1: May Your Wonders Never Cease

LINKS WORTH SOME LOVING

1// Overland Travel Links Worth Some Loving

2// Overland Travel Links Worth Some Loving

3// Overland Travel Links Worth Some Loving

4// Overland Travel Links Worth Some Loving

5// Overland Travel Links Worth Some Loving

Night Photography: Gareth shares some pointers he has learnt about night photography

Favourite Photographers: Gareth shares some of his favs

Overland Design Inspiration: If you are figuring out how to fit out your 4WD for an expedition or overland trip this post is packed full of visual inspiration.

9 Great Travel Books You Have Never Heard Of: Hunting around for some travel inspiration? Start here.

Africa Travel Inspiration: A stunning collection of images from our South African friends overlanding through Namibia.

Popping The Pop-Top Roof For The First Time: Video after the link.

Minimalise Your Life & Make $2000: While ridding ourselves of most of our worldly possessions in order to hit the the road we set this challenge. We dare you to take it on!

Behind The Scenes At Drifta: Drifta are an Aussie company making high quality 4WD fit-outs and drawer systems. We took a tour of their factory and shot this video.

A Year On The Road E-Book: After 12 months on the road we created this free e-book to celebrate and to share some of our top fav photos

What Would We Have Done Differently With Our Set-Up?: Answers here

What We Like About Our Rig and Set-Up: Answers here

The African Overland Network: How it changed my life "Well, you got to us. After inspiring us to get out, buy the car and travel around Queensland last year, now we are looking into Cape Town to London. Have started pre-planning (by which I mean sitting here scratching our heads and wondering where the hell we start. Thanks for the blogs, and the inspiration" TAF + SUSAN, AUSTRALIA

"Inspired much? Well, let me just tell you that I’m sitting at my office desk having just caught up with the wrap ups….And I’m ready to chuck it all in, jump in the 4WD and go" NICOLE, AUSTRALIA

"One of the best things that has happen to my family and myself was meeting you both. We love hearing and seeing where you go and how you are just keep doing what you are doing guys" MIKE, SOUTH AUSTRALIA

"This is totally and absolutely awesome! I am really excited and I’m not the one even doing it. Keep the updates coming guys" HELEN, DUSTY SOLES AUSTRALIA

"Your pre-trip blog is one of the best, so can't wait to read about your adventures" MARTIN, AFRICA OVERLAND NETWORK, AUSTRALIA

"Don't know you guys from a bar of soap, but just needed to say you BOTH impress the hell out of me! Very inspiring what you're doing! Love the photos, love all the little (& big) alterations, additions, customizations etc ... Keep them coming. Go well, the both of you!" ANDREW, MELBOURNE, AUSTRALIA

"I’m so glad we met you two in Nepal and get to hear all about this journey.Will be following your blog and really look forward to soaking up the inspiration from your adventure. The vehicle looks like it will make a comfy cozy home. Good luck" DEANNA, CANADA

"Sounds like an awesome trek, stay safe and have a great time. Your blog is an inspiration for us all to get on and plan the next big adventure" DARREN, AWESOMEDUDE.COM

"When you get to Cape Town I want a coffee off that stove please…." + "South Africa is waiting for you and it’s in no rush….ever" CRAIG, SOUTH AFRICA

"Looking forward to following your travels. You will love it" DAVE + JULIE, WHO-KNOWS-WHERE

"Looking forward to following your travels. We’ve been up Africa as far as Tanzania but plan to do the whole route….one day. Keen to check out your Australian trip side too. Bon voyage" MAXINE, SOUTH AFRICA

"Love, love your kitchen! So supercool" + "Nicely written. Love the idea of pinning the master TO DO list to the wall. We have like ten different lists on the computer, which makes me frantically going from one to the other making sure we do not forget anything" ERICA, ON THE ROAD

"I feel like I discovered your blog just in time! I’ll definitely be following along on this adventure of yours. The Aussie section of the trip is something my husband and I are desperate to do. I’m really looking forward to seeing your photos and hearing your stories!" FIONA, LIFE IN BRIEF, AUSTRALIA

"Good luck! Really love your go-gettin’ attitude! Be good to see you on the road..." DIANA, UK

"I am following your preparations with big interest. We are from South Africa an plan to do the trip north after retirement in a few years time. When you get close to Cape Town make contact with us" PIETER + MARGRIET

"Going to enjoy following your trip. One day we plan to do likewise from Ireland. Safe travels" KIWI 4X4, NEW ZEALAND

"Looking forward to reading about your travels across Australia and Africa. Sounds like an epic journey you have planned."4X4 REVIEW, AUSTRALIA

"I look forward to following your great adventure.... sounds great. Good luck with all your prep - safe traveling." GRANT, LEGEND

"Have just come across your page and can't wait to hear more about your adventures! Happy Travels" TRIPTIDE AUSTRALIA

"Having lived in Kenya for 16 years I long to head back and do a massive African road trip. You guys are living the dream - good for you! Look forward to following you on your travels!!" SIMON, TRAVELLER-AT-LARGE

"You are an inspiration! Sending lots of luck. Jealous Much!" JOANNE, SOME-WHERE-IN-THE-WORLD

"That's what I'm talking about! Take me to my happy place" PAUL, AUSTRALIA

"I actually picked up an overlanding book on sale yesterday. Inspired by reading about your prep, you must be pumped. Looking forward to stories from the road! JOHN, AUSTRALIA

"How strong does your explorers spirit need to be to embark on a 4WD trip through Australia and Africa back-to-back? Two words: Aussie Overlanders" HEMA MAPS, AUSTRALIA

"I like Drifta Camp Kitchens and 4WD Drawer Systems set up. Got one in my camper. It's the Centre of all camping trips. Now my mates have even bought them." LUIGI, AUSTRALIA

"I look forward to reading all about your adventures. It sounds fantastic!" LYNETTE, AUSTRALIA

"I wish I could do a similar trip. You guys are living the dream. No matter how exhausted you may get just keep on going. Never give cause for regrets. All the best" JOHNATHAN, AUSTRALIA

"The world is yours. Go get it!" KEN, AUSTRALIA

"What you’re doing is really living. You’re about to have the time of your life." KATE, BRISBANE

"Reading your blog reminds me just how lucky we are to live in this great country, everyone should get out their and see it.
We look forward to reading more about your travels. Hope you have a great trip." MATTHEW, DIONNE, ETHAN + JADE

Subscribe for notes only shared on email + your (free!) copy of our eBOOK 'Top 10 Photos from A Year On The Road'
Hell, Yeah!